We manage a number of sites West of Melbourne in Altona, Deer Park and Eynesbury that hold this rare and iconic EPBC listed species, and the hope is that through seed collection we will be able to propagate new plants that can be introduced to these and other grassland areas. 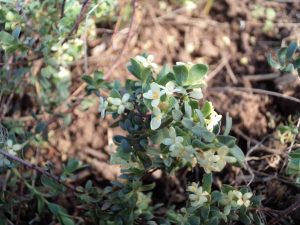 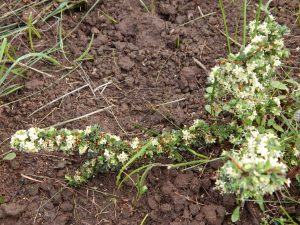 EPBC listed Spiny Rice-flowers flower and seed over winter, which sets them apart from many other species of plant, and makes them quite a bit easier to find during the colder months.

They are also what is known as a dioecious species, meaning that most plants bear either male or female flowers. Most species of plant bear both male and female flower parts on the same individual, making Spiny Rice-flowers slightly unusual in the plant kingdom.

Typically male plants can be distinguished by the presence of bright orange anthers in the flowers, while female plants are identified by being those which produce seed. Being a critically endangered species, every seed is precious!

The seed collection process is a lengthy one, taking months to come to fruition! Once our EPBC listed Spiny Rice-flowers begin to flower, stockings are placed over some of the plant’s stems. These stockings are carefully tied in such a way as to not put any pressure on the plant itself while holding on tightly enough to catch any seeds dropped. In a few months, once the flowering season has finished, these bags can be removed from the Spiny Rice-flowers, then meticulously sorted to find any seeds. Hopefully, in a few months time, we will begin germinating our seeds, ready to bring a new generation of EPBC listed Spiny Rice-flowers to the grasslands.